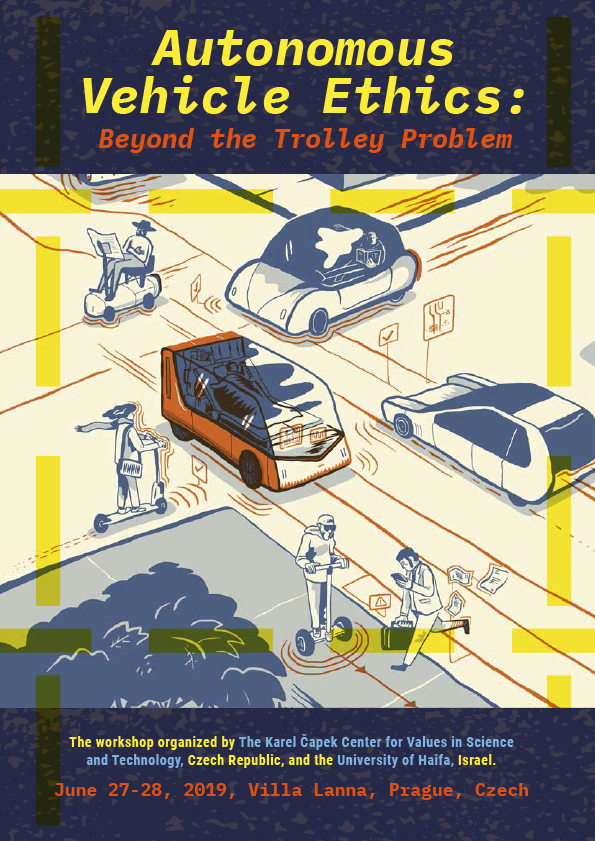 The Karel Čapek Center for Values in Science and Technology (Prague, Czech Republic), the Department of Philosophy of the University of Haifa (Israel), and Ethics + Emerging Sciences Group at the California Polytechnic State University (San Luis Obispo, CA) are pleased to announce the opening of the call for papers for presentation at a workshop on the ethics of autonomous cars.

Most of the work in the ethics of autonomous vehicles has so far concentrated on the variety of Trolley problems that arise in this area. However, it is time to move beyond these issues. We are inviting papers from social scientists, engineers, as well as philosophers that would explore, among others, the following issues:

- how the algorithms in autonomous vehicles might embed ethical assumptions in cases other than crash scenarios;

- how autonomous vehicles might interact with human drivers in mixed or “hybrid” traffic environments;

- how autonomous vehicles might reshape our cities and landscapes;

- what unique security or privacy concerns are raised by autonomous vehicles;

- whether long times spend in autonomous vehicles might lead to new kinds of alienation or loneliness;

- how the benefits and burdens of this new technology will be distributed throughout society.

Please send your abstracts (max. 1000 words) as a PDF file by December 31, 2018 to david.cerny@ilaw.cas.cz. You will be notifed of acceptance by February 1, 2019. You can also direct your inquiries concerning the conference at hribek@flu.cas.cz. The 8th Ernst Mach Workshop -- a two-day event organized annually by the Department of Analytic Philosophy, the Czech Academy of Sciences in Prague -- will be co-sponsored by the Karel Čapek Center for Values in Science and Technology. The theme of the 2019 workshop will be metaphysical and ethial issues in artificial intelligence. The keynote speakers are the world-renowned experts in the fields of philosophy of mind and technology Prof. Susan Schneider (University of Connecticut) and Prof. Mark Coeckelbergh (University of Vienna). In celebration of Prof. Schneider's recently completed new book, we have decided to call the event "Future Minds."

Does Robot Have a Soul?

Karel Čapek Symposium on the Ethics in Robotics and AI

Current
© 2018, The Karel Čapek Center for Values in Science and Technology
Cookies