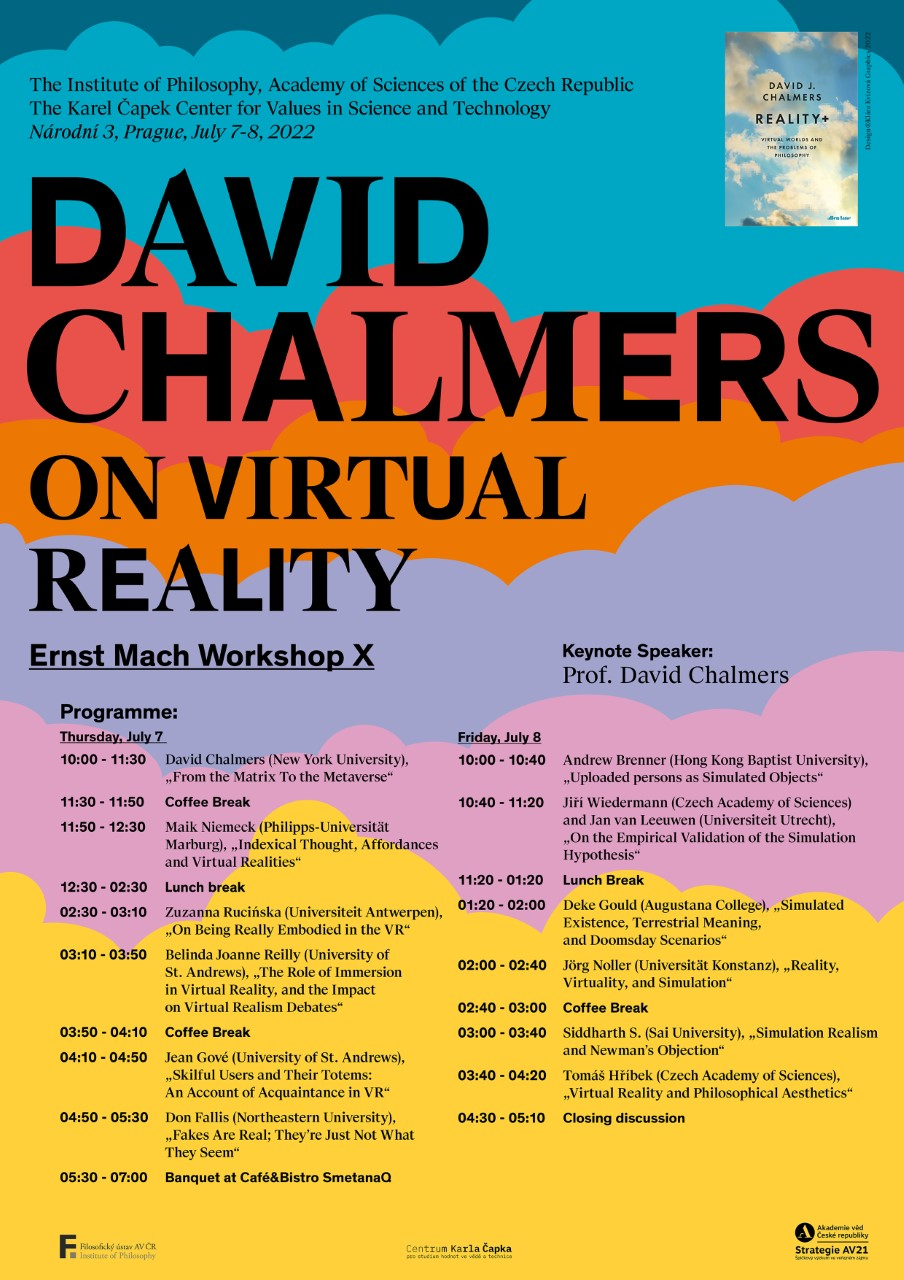 Poster with the program. Karel Čapek Center for Values in Science and Technology (cevast.org), in cooperation with The Institute of Philosophy, Czech Academy of Sciences (www.flu.cas.cz), invites speakers for the annual Ernst Mach Workshop (emw.flu.cas.cz), whose focus in 2022 is going to be David Chalmers's philosophy of virtual reality, as laid out in his new book Reality+: Virtual Reality and the Problems of Philosophy. Prof. Chalmers will summarize the main themes of his book in a keynote lecture and respond to each talk.

Originally a province of science fiction, virtual reality has recently become a technological possibility and increasingly a topic for philosophical reflection. While Bostrom (2003) and Chalmers himself (2003) initially focused the epistemological issues about virtual reality, Chalmers now offers a truly complete philosophy of virtual reality, i.e., of an immersive and interactive reality simulated on a computer. Every branch of philosophy as traditionally conceived must be applicable to virtual reality: epistemology, metaphysics and value theory. Although the book can thus easily serve as an innovative introduction to philosophy, Chalmers also manages to convey to the general reader a number of controversial philosophical theses that he previously defended in his more technical publications: on the irreducible nature of consciousness; on the extended mind; on structural realism; on a structuralist response to Cartesian skepticism, on the nature of computation, on the digital metaphysics of virtual reality and on the character of the manifest image.

·       Is the it-from-bit hypothesis a version of materialism?

·       Is the creator of a simulation a God of the simulated world?

·       Is dualism correct about the mind-body interaction in virtual reality?

·       Could virtual abundance solve the problem of distributive justice?

·       Is the manifest image best reconstructed or discarded?

·       How likely is it that we are in a computer-generated simulation?

·       To what extent does simulation realism solve the problem of Cartesian skepticism?

·       Are virtual realities likely to be imperfect, and how does this affect the likelihood that we are in one of those realities?

Please send a 300-word abstract and any other inquiries to emw@flu.cas.cz.

Deadline for abstracts: May 31st, 2022, Notification of acceptance June 7th

There is no registration fee. The event is planned to be held in person and is sponsored by the Strategy AV 21 program of the Czech Academy of Sciences.

Does Robot Have a Soul?

Prof. Wiedermann, Dr. Černý and Hříbek enjoyed a nice discussion with Prof. Hiroshi Ishiguro, a world-renowned roboticist, during the event celebrating the centenary of "R.U.R." on November 21. However, which one of the two Prof. Ishiguros actually showed up for the debate? The one on the left, or the one on the right? What is a human anyway, right?

Older
© 2018, The Karel Čapek Center for Values in Science and Technology
Cookies